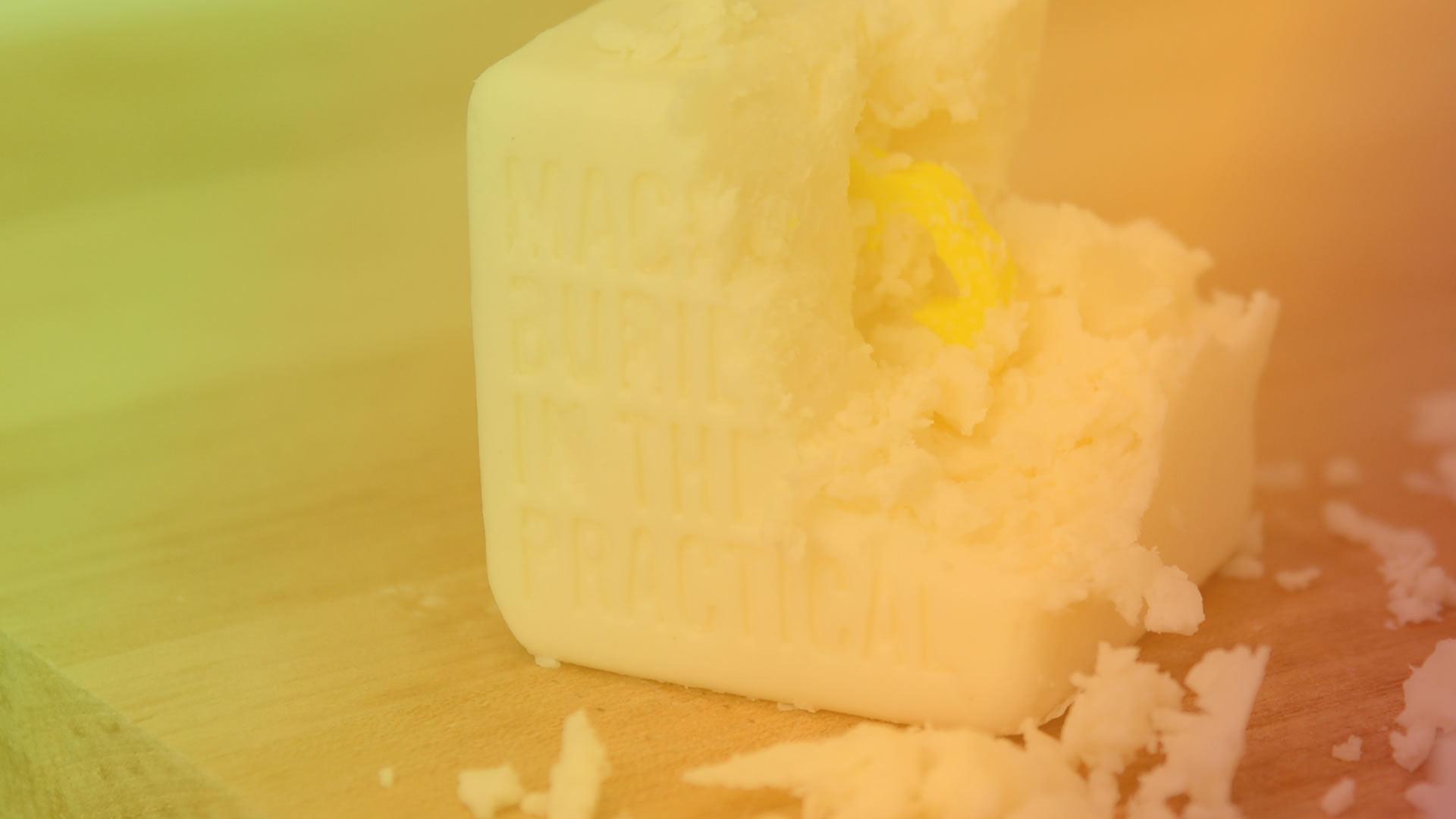 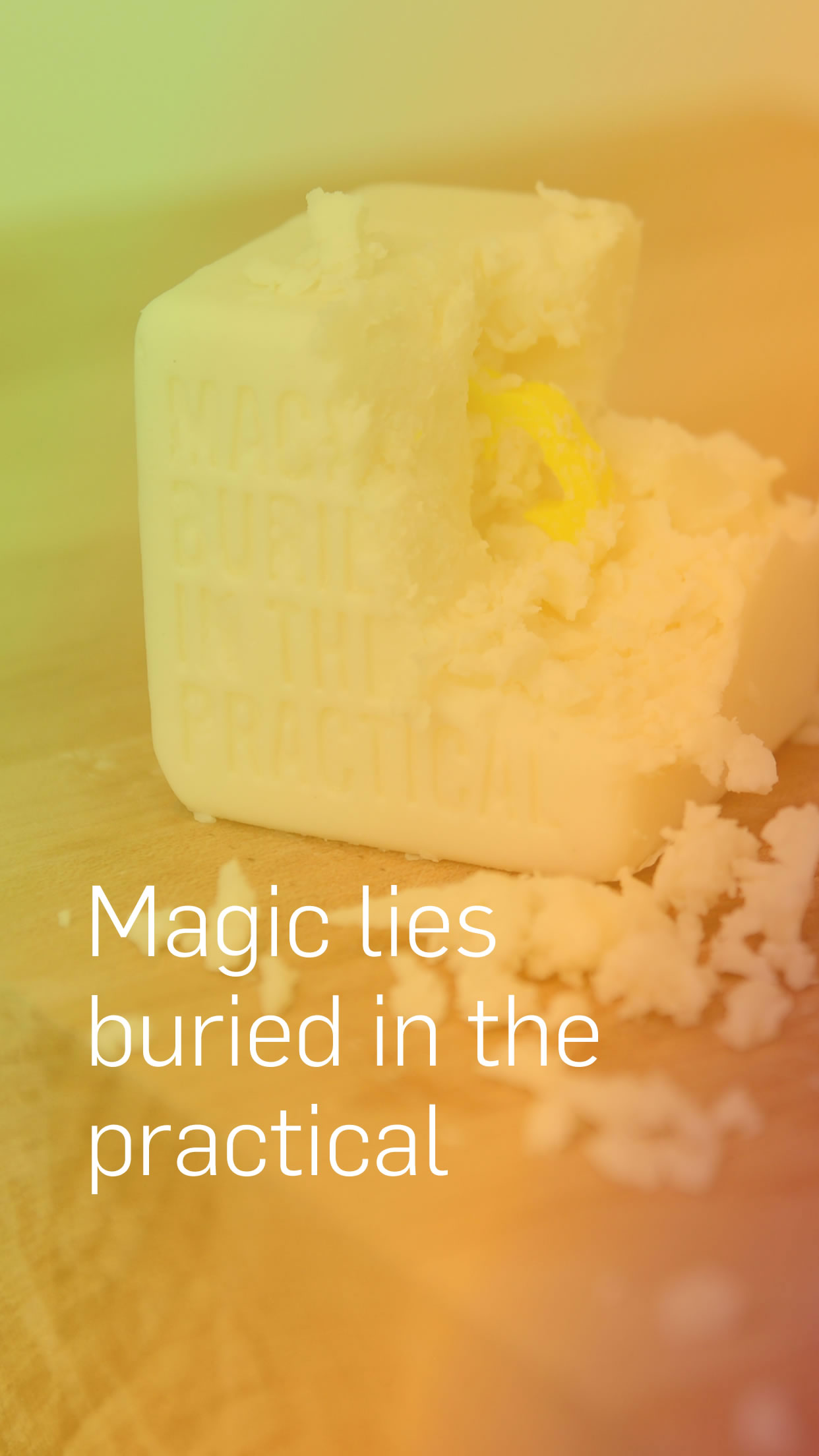 Magic lies buried in the practical

At NONOBJECT we see the customary holiday gift as an opportunity to engage beyond what corporate gifts typically do. It is a chance to experience the power of design and the sense of a positive, meaningful surprise it can provide.

Many cultures welcome the New Year with games that attempt to predict the future. Simple symbols suddenly take on auspicious meanings. The coin hidden in the Serbian bread conveys a prosperous year, the almond in the Swedish rice porridge promises love, and the figurine in the traditional king cake signifies luck. And in the NONOBJECT world what’s hiding in the soap takes on special meaning.

The simple, square block of soap arrives wrapped in a sleeve with a New Years message explaining that a symbol is hidden inside the soap. The sleeve includes graphical representations of each symbol – a heart, a light bulb and a four-leaf clover. And there is a fourth symbol – a diamond – that is only found in one soap, the finder of which can collect a special prize. 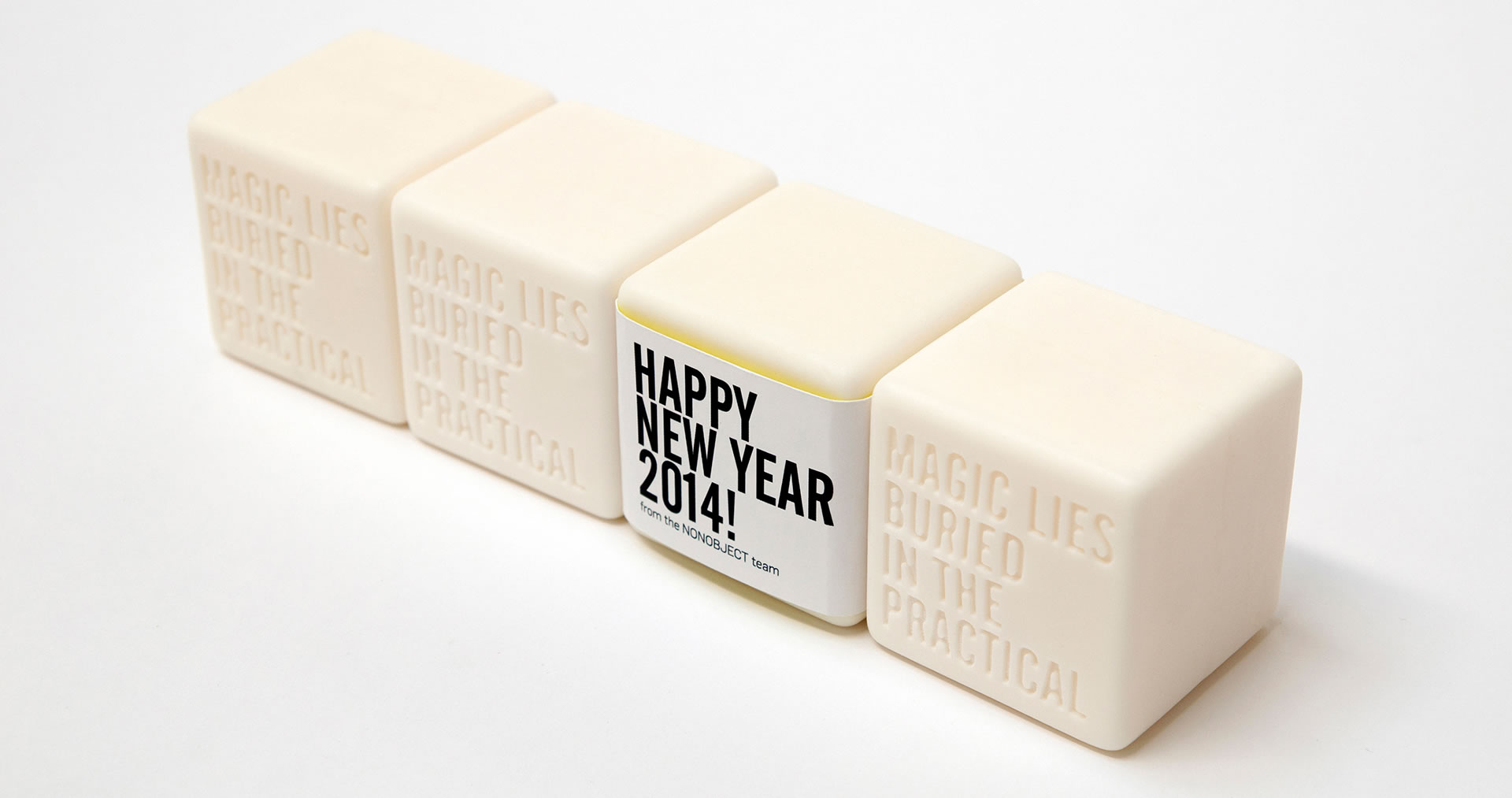 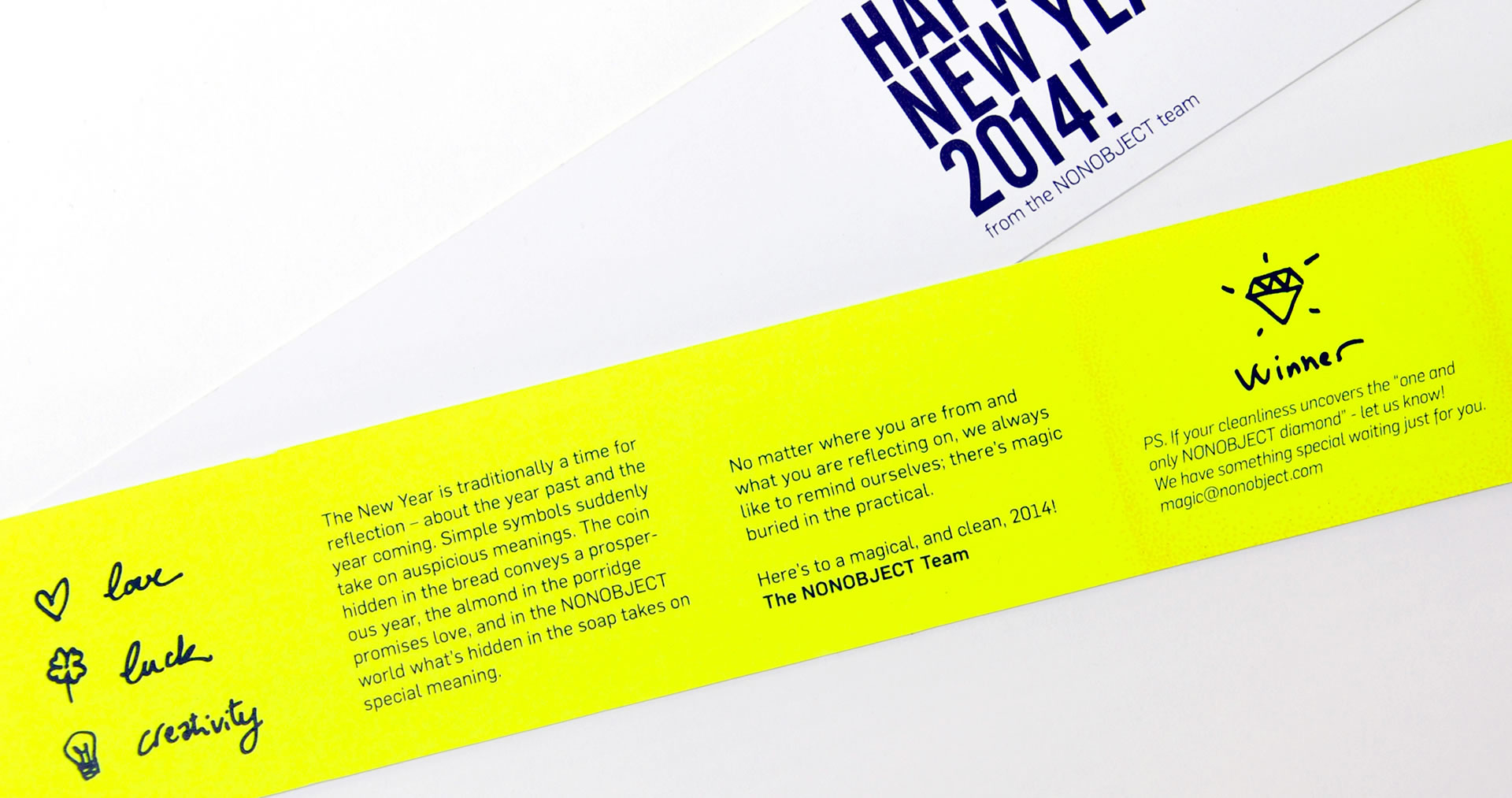 The glow of the electric yellow of the sleeve’s inside is subtly reflected on the soap, and as the recipient removes the sleeve, the engraved sentence “Magic lies buried in the practical” – a saying that captures a core aspect of the NONOBJECT philosophy – becomes visible on the soap. It is an everyday reminder that simple everyday things can become magical. 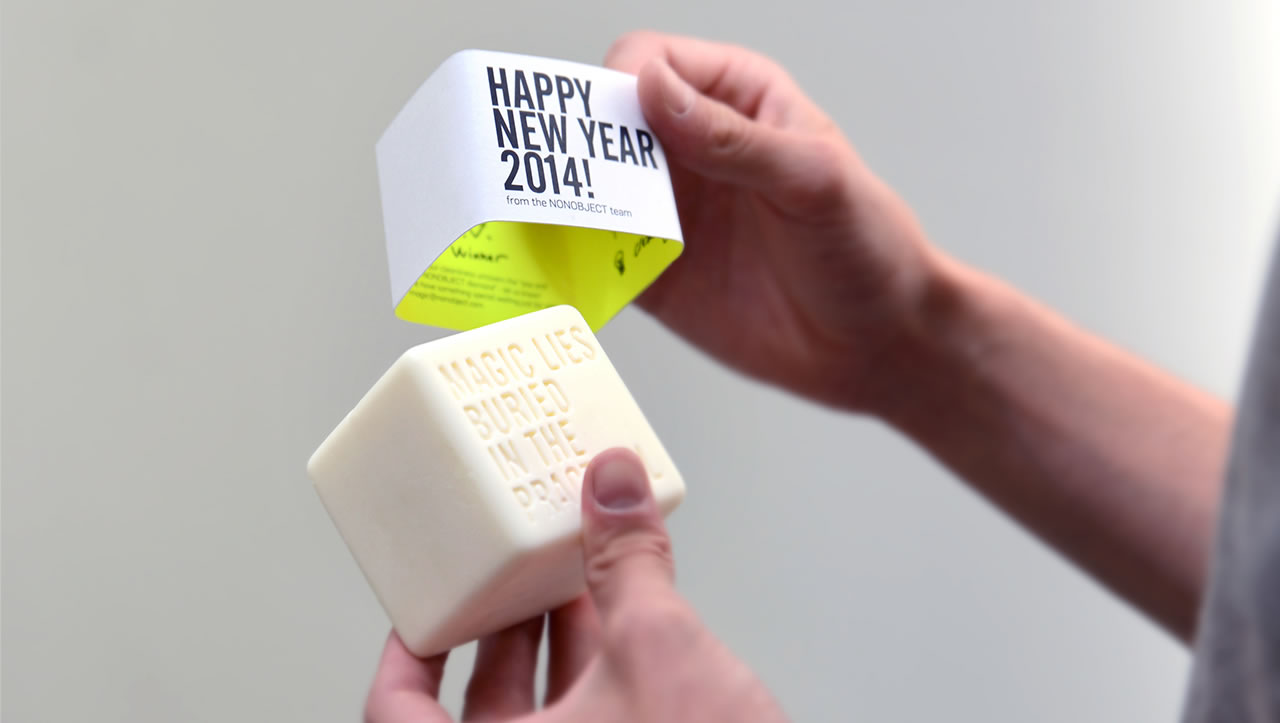 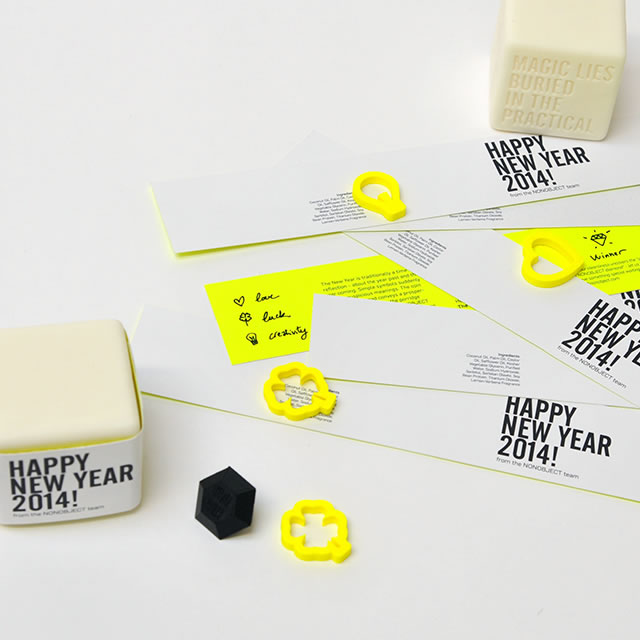 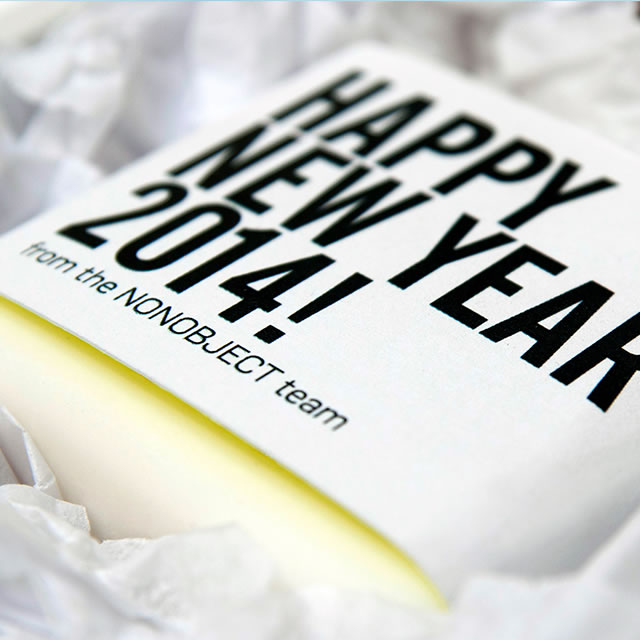 The engagement that we have seen from the NONOBJECT soap has gone beyond what we ever expected. We have received messages from near and far about people who wash their hands longer and more diligently than they ever had, who anticipate their hand washing with delight, and even those who decided that hand washing was simply too slow a way to discover their symbol, and therefore used a hacksaw to split the soap in two! We know the diamond winner is patient, because it is yet to be uncovered.

And in the NONOBJECT world what’s hiding in the soap takes on special meaning.